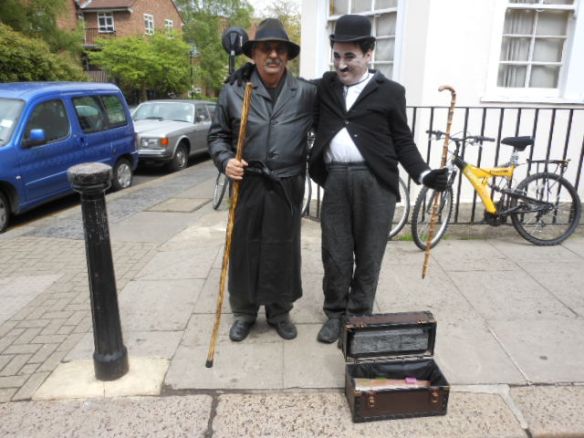 Ned Moore, aka gigoid, (pictured above with a Charlie C. mime, on Portobello Road, in London, UK …. gigoid’s the one with the straight stick, and no white clothing at all….), is a 68 year-old, (!!!… When did that happen?….), retired dilettante, who would rather read than eat, most days. His first blog, “gigoid’s folly”, has been emailed out to folks he knows for about 15 years now. He still considers it his best defense against angst, and the ever-present specter of sheer insanity…..

Due to rigorous curmudgeon training requirements, he has discontinued his Twitter presence, but still indulges in the occasional Facebook session…The user-name, “gigoid”, is never capitalized, as it is only the symbolic representation of my avatar, my online presence, and thus, is not to be considered a “Proper”, or even “Given” name…. It is at least two degrees, if not more, removed from Reality, and feels no need to connect with it too strongly, lest it prevent the full application of imagination….Sadly, though he loves to read, and write, time for both chosen tasks is limited, by physical issues that preclude long sessions at the computer…. He works in spurts, then uses the powers of a Time Lord to post quickly, read a bit, answer comments, and find material about which to write, and/or, rant, which is a habit, and a task he has chosen as a Duty…. He can no longer pursue revolution (which only means, change, after all….) actively, so, he does so the best he can, with keyboard, and the indomitable will to do what es needed, in order to continue the fight for survival…. for all of us.

As is his usual habit, gigoid has hereby demonstrated a fair bit of pomposity, hasn’t he? He also has a problem speaking in the first person, as is patently clear by now… Basically, he doesn’t care….

The wisdom of pearls….(The world is my oyster; which way to the pearls?)

2) The nature of the Universe is Change.

Unpredictable, innovative transformation of Reality is the Norm.

If you have a problem with this, you’re in for a rough ride in Life.

4) Excellence is its own reward.

5) Girls think differently.  So do boys.  Don’t fight it.

8)  Go back.  Everything you need to know is in the first seven axioms.

In the interests of full disclosure, here is a relatively recent picture of gigoid’s face, such as it is….

Blessed Be, and welcome to Exploring Consensual Reality….
Y’all take care out there,
and May the Metaphorse be with you;
Blessed Be, dearest  Carole, Mark, and Theresa…
and everyone else, too…
When I works, I works hard.
When I sits, I sits loose.
When I thinks, I falls asleep.
Which is Why….

Okay, ffolkes, he’s done…. go read some of the stuff he’s written… some of it, if not all, is much better than this, so, you can’t lose in that respect…. Go on now….

Your will is my will….