Ffolkes,
Pale blades of wretched, diseased-looking  grass poked up between the concrete blocks of the sidewalk and the building, adding an air of despair to an otherwise merely ugly stretch of city block, shouting out misery, hard death, and harder life. Storefronts were barred and locked all up and down the street at this hour, though later they would do a bustling business with the crowds of tourists who flocked to the area to score their choice of illegal substances, shopkeepers fronting fruit or hardware to conceal their more lucrative side lights. But now, at 3 o’clock, in the dark that deepens toward dawn, the street was quiet, brooding in the heat lingering from the summer day before.

“It makes you wonder, doesn’t it? Just how normal are we? Just who are the people we nod our hellos to as we pass on the street?  A rather good question to ask–particularly in the Twilight Zone.” — Rod Serling

Well, that is a nasty sounding place, isn’t it? I can’t say what dreams I had to stimulate that to rise up first thing this morning, but it must have been not the most pleasant dreams I’ve had, to be sure. It might have to do with the murder mystery I finished right before bed…. Even though it had a happy ending, the closing scenes included a rather graphic fight, and that may have triggered old stuff just laying around in my memory, which has more than enough similar scenes to tie right into that state. Ah well, c’est la vie!

“In the midst of the word he was trying to say, In the midst of his laughter and glee, He had softly and suddenly vanished away  — for the Snark *was* a Boojum, you see.” — Lewis Carroll, The Hunting of the Snark

“We shall never understand the natural environment until we see it as a living organism. Land can be healthy or sick, fertile or barren, rich or poor, lovingly nurtured or bled white. Our present attitudes and laws governing the ownership and use of land represent an abuse of the concept of private property…. Today you can murder land for private profit. You can leave the corpse for all to see and nobody calls the cops.” — Paul Brooks, The Pursuit of Wilderness (1971)

This statement is now over 50 years old, according to the attribution. From what I can see in the real world, it remains as true today as it was when uttered. We are killing our planet, or rather, we are killing ourselves, and making the planet suffer in the process. No matter how God-like we believe our powers to be, I don’t believe we can quite destroy a whole planet. But, we can sure make it a tough place to survive, and we are doing that rapidly…. I refer to to the World Clock once again…. http://www.poodwaddle.com/clocks/worldclock/

Why are we doing this to ourselves? I’m not the only citizen who is asking this question; there are actually millions of people like me who are aware of how bad things have gotten, and I’ve seen a lot of printed material on the subject. The problem is that nobody with any power to make changes to society at large is at all concerned with the problem, because A) They tend to deny it, as it doesn’t match their delusional view of reality, and B) They don’t care…..

The first reason, denial, is rooted in the avarice and selfishness of those who seek political and/or religious power. Their purpose in life is to “get” as much as they can, gathering resources, money, and power over others to their bosoms like a mother cradles her babe. This purpose keeps them focused on their own goals, and denial is the simplest way to deal with any ideas that are contrary to those goals. There is a popular saying these days, that I’ve heard many, many times, most often with a smile and a wink, to show that the person wants us to believe they are kidding, when they really are not…. that saying goes, “He who dies with the most toys, wins….”  That’s America, all over….

The second reason, indifference, was taught to these folks by the Christian religion. That’s right, religion is responsible, fully and completely, for most of what is wrong in today’s society. This statement will no doubt cause some consternation among those believers who are still buying into that shell game, but it is nonetheless true. It is difficult to build a rational institution when one’s beliefs are based on a basic untruth. More simply, false conclusions are the only possible result of beginning with a false assumption….

The common dogma [of fundamentalists] is fear of modern knowledge, inability to cope with the fast change in a scientific-technological society, and the real breakdown in apparent moral order in recent years That is why hate is the major fuel, fear is the cement of the movement, and superstitious ignorance is the best defence against the dangerous new knowledge. When you bring up arguments that cast serious doubts on their cherished beliefs you are not simply making a rhetorical point, you are threatening their whole Universe and their immortality. That provokes anger and quite frequently violence.” — G Gaia

What, you ask, is this false assumption? Well, I hate to be the one to break it to them, but hey, Mankind is NOT the top of the food chain. Mankind is NOT superior to the other animals, and plants, that live here with us. Mankind is NOT the “owner”, or the “steward”, or the “ruler” of this world. We are not the “Lords of Creation”, nor do we either deserve or actually possess the entitlement so many of our beloved ruling class feels, or claims.  We are nothing more than a fortunate (for us) accident of Nature, no less than any other creature, but no more, for certain….

Here the free spirit of mankind, at length,
Throws its last fetters off; and who shall place
A limit to the giant’s unchained strength,
Or curb his swiftness in the forward race?
— William Cullen Bryant (1794-1878) — The Ages, xxxiii

It is unfortunate in the extreme that so many people believe this prideful boast! Being able to reason hasn’t improved our morality. Being able to imagine has not increased our empathy, or our compassion, though it should. As a species, looked at from an outside viewpoint, we are much less efficient as an animal than are almost any of the other animals we know of; dogs and cats are far superior morally, ethically, and operationally than are humans; I would add they are more intelligent as well, but the humans out there won’t believe that, even though it is obvious to me. I mean, who is feeding who here? Although still subject to the cruelty to which humans so often resort, dogs and cats control their humans pretty well, as a rule…..

“Dogs are animals that poop in public and you’re supposed to pick it up.  After a week of doing this, you’ve got to ask yourself: Who’s the real master in this relationship?” — Anthony Griffin

All this goes back to the same old message that I’ve been sending out for years. If this species, Australopithecus modernus, does not make a change in it’s mental viewpoint, in our moralityn and how that makes us deal with the world, we’ll all be dead within 200 years. The planet will recover; all the poisons we’ve pumped into the environment will be neutralized, and the damage we’ve done will heal over time. But, we will be gone, if we don’t figure out how to change the whole way we deal with reality, from the top of society down…. I hate to be a cynic, but I don’t see it happening, and that is just sad….. 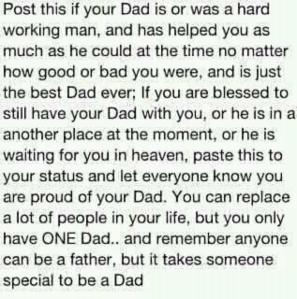 Several days ago, I received an early present for Father’s Day from my son. As far as I know, there was no specific event that prompted this action, which makes it all the more precious, as it just came from his heart. He posted the above text picture on Facebook, for all of his friends, and the entire Net, to see….

Needless to say, I dissolved into happy tears; it is a grand feeling altogether to know that my son feels this way…. it helps to soothe those fears all of us Dads have that what we do won’t be right, or enough. But, this is exactly how I feel about my own father, and it is very satisfying to see that I was able to convey the same love to my own son, just as he is now doing for his own child, Zack……

Several years ago, I released my two kids from the tyranny of Father’s Day, a holiday I don’t like much, as it just points out how people should be treating their parents every day, and establishes a societal guilt stigma to the act of buying stuff for presents. To get away from that, I told my kids that, for the rest of my life, they could forget having to buy me anything on Father’s Day.

A Brook In The City

The farmhouse lingers, though averse to square
With the new city street it has to wear
A number in. But what about the brook
That held the house as in an elbow-crook?
I ask as one who knew the brook, its strength
And impulse, having dipped a finger length
And made it leap my knuckle, having tossed
A flower to try its currents where they crossed.
The meadow grass could be cemented down
From growing under pavements of a town;
The apple trees be sent to hearth-stone flame.
Is water wood to serve a brook the same?
How else dispose of an immortal force
No longer needed? Staunch it at its source
With cinder loads dumped down? The brook was thrown
Deep in a sewer dungeon under stone
In fetid darkness still to live and run —
And all for nothing it had ever done
Except forget to go in fear perhaps.
No one would know except for ancient maps
That such a brook ran water. But I wonder
If from its being kept forever under,
The thoughts may not have risen that so keep
This new-built city from both work and sleep.

Not a bad morning’s work, I think…. it will do. This may be the only part of life where I operate on faith, though my faith is hopefully based on some real evidence in this area. No matter, it’s going out the way it is, regardless…. Y’all take care out there, and May the Metaphorse be with you….. 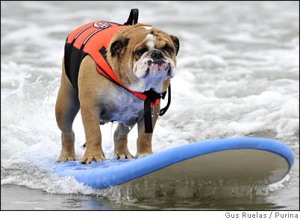 6 thoughts on “Chutzpah cannot be rented….”