Yesterday’s title is more connected to reality than I had previously realized; I can feel the changes happening here at ECR as I type. Yet, it all looks the same from this vantage point; a blank, white screen, filled only with trepidation for the need to fulfill my chosen duty….. which is NOT going to get it done. Perhaps if I petitioned for an extension?…..

Reality, however much we would prefer it do so, does not do extensions…. When the bill comes due, it’s payable in full, or deal with the immediate consequences, regardless of whether or not those consequences are something with which we are capable of dealing. In short, duty gets done, or a price is paid. No exceptions, no excuses, and whining, though optional, is considered wimpy, and not encouraged by any right-thinking participants…. Reality itself adopts the cat’s position, i.e., it doesn’t give a shit either way….

Regardless of how much I blather about it, or dance around the point, it remains…. changes are coming to this blog…. In fact, they started yesterday, but, even I didn’t notice…. not that it matters now, does it? Once it’s posted, there’s no more editing allowed; once you set out on that slippery slope of scree, there’s little hope to ever get done with it…. and, given the idiosyncrasies of the WP editing page, I don’t like to chance it, anyway, as one never knows how one’s proposed changes will actually turn out on the page…. That’s too much of a crap shoot for me….

All of this blather, of course, is merely a prelude, to madness and folly, I’m sure, but, that actually remains to be seen…. One thing I DO know for sure, and that is that I am going to be spending a LOT more time out in the BBR, looking for suitable pictures to illustrate the pearls…. I say that because my first outing, yesterday, for that purpose was more of a wash than I like, as you’ll see from the pix taken…. It’s not going to be as easy as I had thought, which is fine….. a little complexity is good for the soul…

I’m wandering…. I can feel it. I’m circling around, just filling in lines until enough of them have accumulated to call it an intro…. AND….  I believe I’ve reached that point already. From what I can see from here, this appears to be sufficient, and I don’t hear any objections from the court-appointed monitors, so, I think we can go on now, and see how this is going to work, exactly…. You see, it’s all new to me, too…. Isn’t that encouraging?….

No? Oh well…. I guess that means we’re all committed to this fabulous folly, so, we may as well just get on with it, before I manage to screw this up any further….

“It’s snowing still. And freezing. However, we haven’t had an earthquake lately.” — A.A. Milne’s Eeyore

Here is how I’m going to have this work…. First comes the picture; below the picture will be a pearl, followed by some quick, hopefully amusing or engaging prose or poetry from me, then the next picture…. and so on, down the line. It’s not complicated, but, what do you want to bet I can screw it up? Okay, don’t everyone offer money at once; I know I’m a Bozo, so you can’t hurt my feelings…. I do hope you enjoy this new experiment, designed to save the sanity of everyone involved….. That said, let’s be off…. Oh, if it isn’t my own picture, attribution will be listed after the picture, & before the pearl….

Actually, kids are cool…. Ralph, I think, had just spent two days babysitting his nephews, and was a bit overwrought when he wrote this particular aphorism…. This picture is included just because it was so cool; it’s hard NOT to anthropomorphize this one, and believe the hippo is actually smiling at having her picture taken with the little girl, who is more bemused than pleased, to judge by appearances….. It’s also hard to not believe that both are familiar with the whole picture-taking thing, aren’t really INTO it, and are putting up going along with it out of politeness….

See, now isn’t this fun, and educational? Speculating nonsense about odd configurations of animals and people is always a kick in the pants, eh? No? Oh…. Well, we’ll go on anyway….. 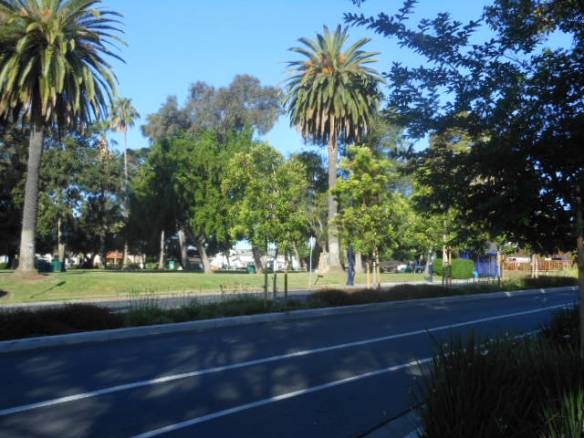 “With sufficient thrust, pigs fly just fine. However, this is not necessarily a good idea. It is hard to be sure where they are going to land, and it could be dangerous sitting under them as they fly overhead.” — RFC1925

The picture is a study of a park, across the street from the bus stop where I awaited a bus home from a nearby town. It has no particular significance, other than the desire to get started taking photos for this experiment….. I guess I’ll figure out how to make the pictures fit into the pearls better as the process evolves…. One may only hope…. 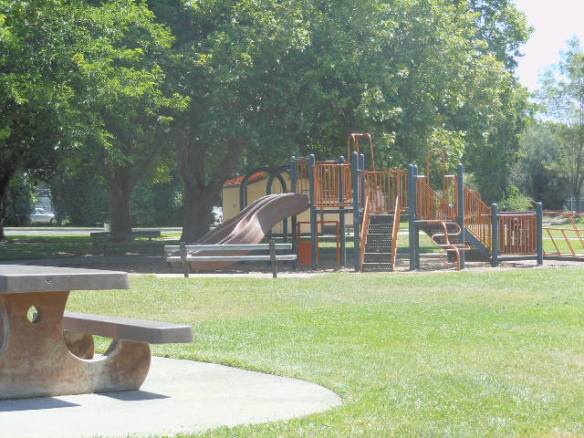 The picture is the kid’s playground at another park, near my house, next to the field where a local semi-pro baseball team plays, a few blocks from where I live…. The pearl, once again, has little to do with the picture; I just thought it was a good pearl, and a good bit of logic with which to approach reality…. As mentioned above, this process is still evolving, so, bear with me, please…. It will get more compelling, I promise…. 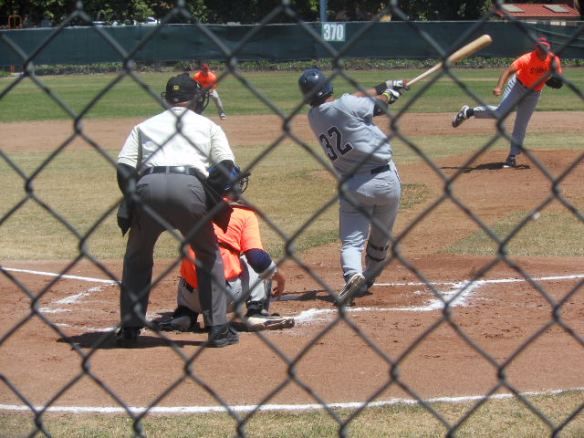 This picture is my first attempt at an action shot…. not too bad, all in all. The accompanying pearl is my firm belief, and I hope that whatever sense of humor is possessed by the Gentle Reader will extend itself to include this Pearl, as the first of its kind…. I have a feeling this new technique is going to work out well, if I can only get enough pictures to work with…. If nothing else, it will get me out of the house, and save me from any further descent into sloth and lethargy…. For now, let’s go on, & see if I can pull the rest of this together for today….

“You see things, and you say “WHY?” But I dream things that never were, and I say “WHY NOT?”” — George Bernard Shaw, “Back to Methuselah”

I’m saving time today by not searching for a poem; here, instead, is one of mine, to keep the blame for all this where it belongs….

To finish off today’s effort, an old-school pearl is pretty much a given…. If nothing else, it will give me a feeling of familiarity that should soothe the pain of the newest part of this, which is working muscles that aren’t accustomed to such a workout…. I’m not whining, because I like it; it feels good to stretch out in directions heretofore neglected, and my muscles can use the work. They’re actually more used to being worked hard than they are NOT being used, which is the case far too much in my current position…. Changes comin’ all around, ffolkes…. Hope you enjoy today’s gathering of gems…..

“A foolish consistency is the hobgoblin of little minds, adored by little statesmen and philosophers and divines.  With consistency a great soul has simply nothing to do.” — Ralph Waldo Emerson (1803-1882) Essays: First Series (1841) “Self-Reliance”

“Government is a trust, and the officers of the government are trustees; and both the trust and the trustees are created for the benefit of the people.” — Henry Clay (1777-1852) — Speech at Ashland, Ky., March 1829

(This pearl may seem out of place, but, I thought that maybe a politician might drop in to read today, and, if so, it would be good for them to see a reminder of what they are SUPPOSED to be doing….. The rest of the pearls all go together pretty seamlessly, I think….)

“Often, the surest way to convey misinformation is to tell the strict truth.” — Mark Twain

“Men show their character in nothing more clearly than by what they think laughable.” — Johann Wolfgang von Goethe (1749-1832)

“The only abnormality is the incapacity to love.” — Anais Nin

Just so you know, this pearl is one for the ages…. I mean it. It’s got a LOT of what is needed to make ourselves into better human beings…. happier, too, if done right….

This certainly put the effort back into the job, I’ll say that. I suppose anything has a learning curve, at first…. Let’s hope it turns out to be worth it…. which I’ll never know if I don’t get this posted, so, see ya, ffolkes….

—
Sometimes I sits and thinks,
and sometimes,
I just sits.gigoid the dubious

3 thoughts on “Only the freshest innuendo served here…..”