“He who is most slow in making a promise, is the most faithful in the performance of it.” 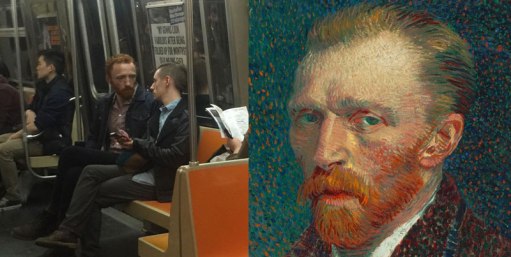 Many years ago I saw this painting in person, at an exhibit of Van Gogh’s work on display at San Francisco’s De Young Museum, while on tour from, I think, the Louvre, sometime in the 1968 to 1972 period, when I lived in Berkeley. It is, in my mind, one of the most amazing pieces of art I have ever seen, up close, at a certain distance. While looking at it, I had to move to allow someone else to view, stepping back from where I’d been. Two steps behind the spot I had been standing, I looked at the painting again, and the face was ALIVE. The eyes, electric blue, gazed directly into mine, and I swore he would speak. You could see the life pulsing under his skin, just as if it were a 3 dimensional object…. I have to admit, it spooked me a bit….

Now I’ve regaled y’all with such a FASCINATING opening subject, we’ll retreat back to the technique outlined in yesterday’ Pearl, which some of y’all may remember…. You should, for it concerns YOU…. Ah, don’t worry, no big deal…. Just, well…. pay attention, okay?….

“I am one who finds within me a nobility that spurns the idle pratings of the great, and their mean boast of what their fathers were, while they themselves are fools effeminate, the scorn of all who know the worth of mind and virtue.” — Percival

(Hmm… I don’t know this Percy-fellow, but, he sounds like my kinda guy….)

Though no introduction for this piece of music should be necessary, I’ll say this…. Even those who don’t know, or even like classical music, have nothing much to say against this piece, so familiar it can be considered part of every human’s cultural heritage…. Enjoy, ffolkes; human creativity never ever got any better than this; nor is it ever likely to do so….

A distinct possibility exists which may cause some minor ripples in this blog…. In essence, it exists in the fact I seem to have burnt out my ranting mode, at least to some extent…. I can’t seem to work up the passion needed to really rip them into shreds when I attack…. That will never do, but, I guess there’s good reason, far too involved to explore here and now. For now, I’ll see if I can come up with a sublimation, in the form of an old-school pearl, with parameters set to take some serious pokes at politicians, pundits, and other talking heads….. Enjoy!….

“Under every stone lurks a politician.” Aristophanes

“Congress is not the sole suppository of wisdom.” — Rep. Bill Schuette (R-MI)

” — Bother! said Pooh, as he found a politician in his honey pot.” — Smart Bee

CORSAIR, n.  A politician of the seas. — Ambrose Bierce, “The Devil’s Dictionary”

The Preacher, the Politician, the Teacher,
Were each of them once a kiddie.
A child, indeed, is a wonderful creature.
Do I want one?  God Forbiddie!

Idiosyncratic images, clamoring for regard,
fill up the white, white screen on which I view
my life, never seeing, nor invited to sup
ambrosial remnants of anything new.

Still, yet almost in motion, allegory sails away
bobbing gently, quick and easy to find,
signs of one happy child, seriously at play,
blissfully immersed, focused joy in mind.

Formidable cries of outraged simple justice
echo plaintive relevance, in half the time.
Maladaptive infants, destined for hospice
salvage an only child, daring to sing in rhyme.

Creativity equals unquestioning farce,
often reaching for absurdity, brazenly afire.
Instead, a blow is felt no joy will ever soften,
accepting the price, added to the cost of desire.

I mentioned yesterday how SB has been on a tear of late, showing me line after line of crap, then laughing to itself…. Since I have to be patient, it takes some time to find the appropriate pearls, even WITH clear parameters…. Here is another rather esoteric pearl, with parameters set to a loose interpretation of “Life at Large, and what it takes to make a nice, round, happy one….”

“An it harm none, Do what ye will.” — final words of the http://wicca.com/celtic/wicca/rede.htm

“Each man can interpret another’s experience only by his own.” — Thoreau

“Eternity is a mere moment, just long enough for a joke.” — Hermann Hesse

It is not strength, but art, obtains the prize,
And to be swift is less than to be wise.
‘T is more by art than force of num’rous strokes.

Not too shabby for an old, formerly fat fart, with flat feet, and, frequent flatulence…. Not bad for me, either…. Before this degenerates any further, I’m taking my leave, stage center, until tomorrow…. See y’all then, ffolkes…. Stay alert, it’s getting pretty crazy out there in the BBR….

12 thoughts on “Just another nanosecond in limbo….”