“Nobody realizes that some people expend tremendous energy merely to be normal.”

I have but one thing to tell you today, as we begin our daily journey OUT of madness…. Here, right before your skeptical eyes, pigs will fly, lightning will strike twice, hell will freeze over, and eventually, things will get really interesting…

“No one loves the man whom he fears.” — Aristotle 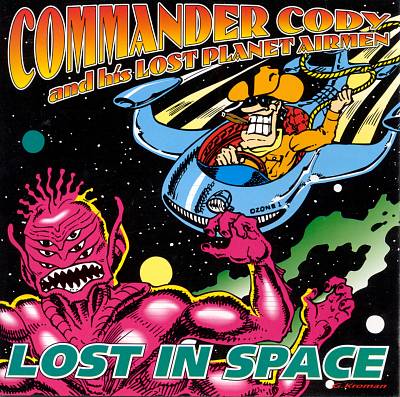 Image from allmusic.com via Google Images

It’s not pulling my covers to claim this band as a favorite; I’ve never hidden my history as a Hippie. In Commander Cody’s case, I have more reason than just the artwork, the attitudes, the down & dirty, funky blues, and solid rock the Airmen always played…. During my college years, I managed to hire the band for one of our cooperative residence’s parties, a great success in many respects; Yes! The Commander was in my house!….

For that reason alone they hold a special place in my heart, and my liver…. a long, sad story, involving a large quantity of cheap white rum, a quart of mai tai mix, and an eighteen year old fool…. The smell of Ron Rico white still makes me want to puke….

But, I digress…. Unless I managed to screw up the code somehow, you should be treated to all of their music available on You Tube, one after another…. If not, that’s what the link is for…. Enjoy, ffolkes….

“We live in the kind of world where courage is the most essential of virtues; without courage, the other virtues are useless.” — Edward Abbey

This is SO true…. Mr. Abbey has, I believe, struck upon what I’d call a universal truth, one true in all of the ages of Mankind…. Hell, I’ve said it before, myself…. Oh, not in those exact, clear words, but, I have posted the following many times, which, essentially, brings out the same point, though it looks at it from the other side of the mirror….

All of us, at one time in our lives, or another, have been guilty of this; anyone who says differently is, well, they’re lying, whether they believe it or not…. As proof, all I need to do is ask that person the last time they watched a woman walk down the street, and did not punch out the men who whistled at her…. Such public displays of misogyny, though seemingly mild and harmless, (not to mention socially approved), are, in my estimation, a symptom of the problem, stemming from ignorance, and the even greater evil perpetrated by the major religions of the world, who encourage that misogyny in men…. for one single reason, to wit: men’s fear of women, and of their own sexuality….

To my way of thinking, it takes a pretty poor excuse for a man to take out his own childish fears on women, when a bit of courage and learning can bring them out of that fear, into a world where both men and women can work together to survive, rather than constantly being at war, instigated by the weaker sex, ie. men…. I would point out that our society’s primary response to any problem is to go to war against it, which is a typically male attitude…. Most women don’t automatically go to war when they want to achieve some end…. Men do, and have proven it for millennia….

Yes, I said men were weaker than women, and I meant it…. If men were so strong, why do women live longer? Why do they give childbirth, instead of us? And, why are they seemingly, according to the evidence given by the behavior of other mammalian species, the natural leaders of each species society? I believe it is because that is the way the species evolved, the way it works best to survive, which is, after all, our primary purpose here on this planet. Our purpose is NOT to rape, pillage, and destroy, all of which seem to be the primary RESULTS of all of the male-dominated societies in history, especially when those societies were driven by Christianity, or any of the other religions whereof the former President speaks…

As far as I can see, the only way to get through to all these assholes, who would rather fight with women than appreciate them, is through shame…. Deserved shame, at that, for using the ONE advantage over women men have, i.e., brute strength, to subjugate the entire other half of our species, all because our our own innate fears, which are easily dismissed when understood…. But, most men, like most humans, even women, are lazy, and would prefer to NOT have to think, or, for that matter, to make the effort to be brave….

Sorry, guys, but. that’s just the way I see it…. So, wake the fuck up, get out of your stupid head, and get with the program here. We need to work together, WITH women, not against them, if all of us are to survive…. The way we are going now, we won’t make it to the next millennium…. Hell, unless we can come up with some pretty fancy scientific footwork here in the next TEN years, we’re all going to be in deep shit…

Evolution, as it applies the development of this blog, seems to have brought this section to a place where it becomes our lesson for the day, so to speak…. Many of the pearls, and the pearls they form, of late, have told a message that, when applied by anyone to Life, in a dedicated manner, always seems to make it all work better, helping us to find, and keep, our balance, as well as the happiness, always inside us, if we can learn to feel it….

Today is another of such lessons, this time, seemingly, intended to direct us on a path to…. ourselves….

“Knowledge is the antidote of fear.” — Emerson

“Either you think — or else others have to think for you and take power from you, pervert and discipline your natural tastes, civilize and sterilize you.” — F. Scott Fitzgerald

“Self-reflection is the school of wisdom.” — Balthasar Gracia

“Morality is moral only if it is voluntary.” — Lincoln Steffens

“Be kind, for everyone you meet is fighting a hard battle.” — Philo

Not too shabby, I think…. Of course, it does help the overall quality when I’m up half the bloody night with dyskinesia, which not only keeps me from sleeping, but, keeps my mind awake from the anger at experiencing it at all (the blame for that can be laid directly at the feet of two doctors and an HMO….), thus providing us with a fresh rant, and a new poem, which finally decided to creep out from where it has been hiding…. Don’t know if y’all noticed it, or not… Any who, it’s done, I’m still up, and it’s 3:52 AM…. Now what the hell am I going to do?

2 thoughts on “Acceding to protocol, he dressed in mufti….”