The physical requirements for blogging seem to be eluding me; I’m still adjusting to NOT having much time to write. Then, when SB becomes recalcitrant, things go bad quickly. To make up for it, here is a pretty decent Pearl from late in 2014, with my wishes for you to enjoy….

See y’all tomorrow, given the right set of circumstances, like, the sun coming up….

“No falsehood lingers into old age.” 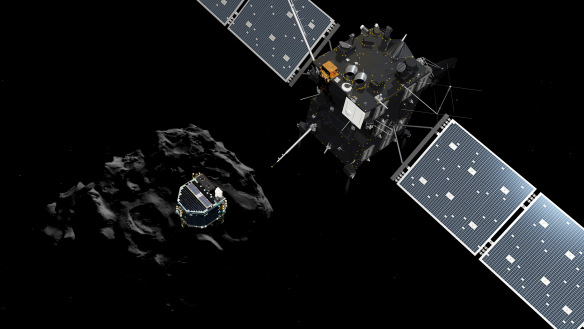 In response to the quote, from Sophocles, I would say, “except, perhaps, those we tell to ourselves.” That simple fact may be part of the problem, wouldn’t you think?….. Ah well….

In coming centuries, should we survive to see them, the Philae lander, (which you see above in an artist’s rendering of its descent to the comet on which it tried to land, taken from Space.com’s coverage of the event), may become the subject of a number of jokes, described as “Philae, the Bouncing Bot”, or other such inane nicknames, a result of the comical way it managed to complete its landing sequence…. Thanks to the unknown physical demands of the landing, onto a comet moving at great speed, the silly thing managed to bounce three times before coming to a complete rest on the surface, a…

3 thoughts on “Nuke those gum drops before they’re served, please….”