“The question was put to him, what hope is; and his answer was,

“The dream of a waking man.” 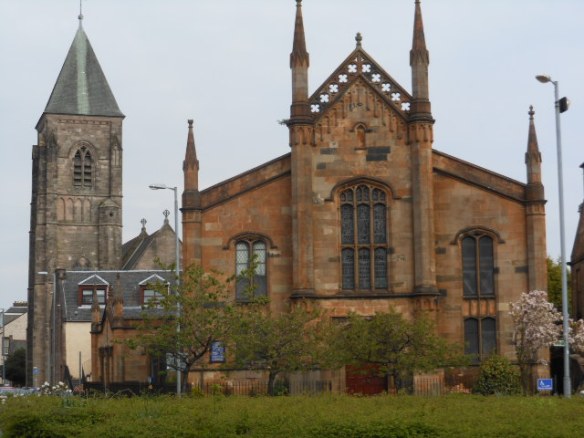 I’m marking today down on my calendar; this is the first morning all month I’ve awakened without the usual screaming in my hands and shoulder, and I can once again attest to the accuracy of the old saw that says, “true freedom is the release from pain.” Even though there is some lingering stiffness, and threat of further pain, the mere absence of the worst part of it is a welcome sign, hopefully of changes for the better…. Hope springs eternal, even when unjustified by reality’s indifference to our suffering….

That, as they say, though, is Life, so, there’s no point in getting all worked up over those parts of it we can’t change…. Our old friend, Epictetus, told us that, and, he was right…. So, I’m not going to complain about any possible pain in the future, as it is merely the lot of man, and woman, to have pain as a part of life…. Nor will I spend any longer celebrating its absence, as it will no doubt make an appearance again before the day is done…. Now, all I have to do is figure out how to be somewhere else when it gets here….

Right…. Now that I’ve gone back to my fantasy world, maybe we can figure out what we’re doing with this Pearl…. Of course, that would mean we’d need to figure out what we’re doing here in the intro, and, since that particular event has NEVER occurred, it’s rather doubtful we’d be able to pull it off today. We’ve already established the futility of trying to change anything, (well, other than my own attitudes, and those aren’t going anywhere until AFTER coffee….), so there is little point in even discussing any such useless ideas…. Instead, we’ll wait, to see if we can fool anyone into making a break for the border, and just follow them….

While we’re waiting for someone’s nerve to crack, I suggest we get on with the rest of today’s post; if we can work this correctly, paying attention to the currents, and the obvious markers on the banks of the river, we might be able to cross off one of our daily chores while we’re at it. And, if not, well, I don’t think anyone would notice, anyway, so, why not? It won’t make any difference in the final product, and I’m pretty sure we can do it without any major splashage…. It’s worth a try, n’est pas?…. I think so….  In fact, I’m convinced, so, hang on, & we’ll get right on that….

“Some people never learn anything because they understand everything  too soon.” — Alexander Pope (1688-1744)

It’s another classical day, just because that’s what I feel like listening to…. and, so do you….

“Humanity has the stars in its future, and that future is too important to be lost under the burden of juvenile folly and ignorant superstition.” — Isaac Asimov

Isaac Asimov was one of mankind’s best, a shining example of how a life can be lived well, with honor, joy, and compassion foremost…. He possessed a powerful intellect, and an insatiable curiosity about EVERYTHING in the universe; combined with his seemingly limitless energy, and an abiding desire to share all he knew with others, this made him one of history’s most prolific authors, with well over 600 books, of both fiction, and non-fiction, published during his lifetime. He wrote more books of non-fiction than fiction, literally covering every science listed in the alphabet, and more….

He is credited with the coining of three of today’s most well-known words, each of which is having a huge effect on our culture; he created the word, and the concept of “robotics”, as well as “positronic brains”, another term for artificially intelligent computer/robots…. He also created the concept of “psychohistory”…. All of these are are now considered to be mainstream usage, words which describe concepts on the cutting edge of technology, and modern psychology…

His belief in Man’s future in the stars was firm, as stated above; for much of my life, I’ve been a willing proponent of the same idea, i.e, we humans MUST explore space, if we are to have any chance of living up to our potential in this universe…. This single planet is not enough to encompass our imagination, as evidenced by our entire history of literature, which explores the very boundaries of existence, not merely on this plane, but, in all dimensions, throughout the visible, and non-visible universe….

Isaac believed, as do I, as humans, if we can imagine it, we can do it…. Thus far, nothing of which we’ve dreamed has been found to be impossible, but, rather,  merely time-consuming, or currently not within our sphere of knowledge…. The only question that remains to be answered is whether our lack of moral/ethical maturity will prevent us from surviving long enough acquire the knowledge, to achieve that potential…. It is to this difficulty that Robert Heinlein referred, when he stated:

“Being right too soon is socially unacceptable.” — Robert Heinlein

Isaac also recognized the difficulties involved in getting ALL of mankind to realize our commonality…. In fact, he was a victim of the unwashed masses of the ignorant for much of his life…. as evidenced by the following: 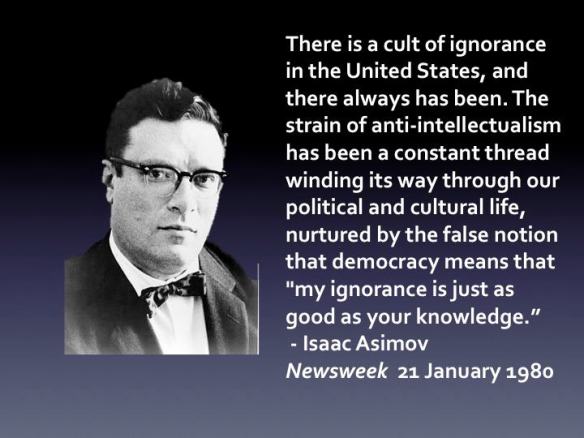 The cult of ignorance is now in control of the US Senate, with a number of Republican Senators who have, as recently as the last election, expressed their disbelief in the theory of evolution, which has long been regarded as scientific fact; the same group tends to disbelieve in global warming, as well, which has also been found to be unassailable FACT…. These ignorant fools will now spend the next four years blocking any legislation put forth which might mitigate any of the effects of that warming, which is no longer deniable by any rational being over the age of three…

But, these assholes know they’re right, even if we don’t, and they’ll protect us from ourselves, you betcha…. The side effect of that, of course, is, we’re all going to die, but, hey, at least they’ll be rich when they die, right?…. Idiots…

I almost fell into ranting there, didn’t I? I promised myself I’d keep this positive, so, I’m going to leave this somewhat unfinished…. I’ll merely say this…. I believe our destiny is to go to the stars; colonizing this solar system is the first step to that destiny, and may, at this point, be our only hope of surviving our own idiocy long enough to get there…. I’d like to think that someday, my grandchild will stand on one of the moons of Saturn, looking up at the rings, and wondering if HIS grandchild will stand on the planet of another star…. Now, THAT is a dream worth dreaming….

Our destiny lies
in the stars above our heads.
‘Tis our last, best hope.

This poem is one of my better efforts, if only for its relevance to reality…. It rhymes, too….


Seeing is Conducive to Belief

Folly sits so comfortably upon my fevered brow
one would easily believe that I would know how
to look at Life with a jaded, weary eye
seeing enough, and more, to know Why.

Such seems the case, as I will it to be,
an open book of a face, it looks so like me;
what’s known to be so, needs no close attention
familiar sights require no minding, nor mention.

The eye is drawn at once to the stark and new,
and sent back to sleep by successful review.
Once we find evidence we feel we understand,
curiosity languishes, dismissed at command.

Ancient sages knew the insidious value of illusion,
preachers and pundits know the power of confusion.
Each pair of eyes contains its own point of reference,
each mind sets its own standards of preference.

Seeing is believing, for those who live in thrall,
accepting what is perceived is all they ever recall.
Unknown to them, reality follows another set of rules,
Deeper, more dangerous, and no place for fools.

Much of yesterday is a fog in my memory, mostly due to the copious amount of drugs I consumed in the battle against my skeleton…. Somewhere in that fog, I apparently allowed Smart Bee to put together this pearl…. I’m not in the mood to figure out if it is just me, or if it is really a very deep, very useful pearl…. But, then, y’all are the only ones who can make any final judgments on that, as it is intended for y’all to consume, not me…. If it doesn’t make the grade, or, even if it does, somehow, manage to make a statement worth repeating, let me know…. Otherwise, you should probably just keep it to yourself, and let everyone else make their own decision…. I know I will…

“Complaint always comes back in an echo from the ends of the world;  but silence strengthens us.” — G. K. Chesterton, The Father Brown Omnibus

“Asked what he gained from philosophy, he answered, “To do without being commanded what others do from fear of the laws.” — Diogenes Laertius (c. 200 AD) — Aristotle, xi

“Whatsoever that be within us that feels, thinks, desires, and animates, is something celestial, divine, and, consequently, imperishable.” — Aristotle (B.C. 384-322)

“The meaning of here and now is beautifully illustrated by a Zen story of a monk who was being chased by two tigers. He came to the edge of a cliff. He looked back – the tigers were almost upon him. Noticing a vine  eading over the cliff, he quickly crawled over the edge and began to let himself down the vine. Then as he checked below, he saw two tigers waiting for him at the bottom of the cliff. He looked up and observed that two mice were gnawing away at the vine. Just then, he saw a beautiful strawberry within arm’s reach. He picked it and enjoyed the best tasting strawberry in his whole life!” — Ken Keyes

I’m too old a hand at this to make any snap judgments, but, I can say this…. It’s done…. Having just gone back and proofed it, I can add this: it’s a damn good thing it IS done…. If I need to explain that statement, well, too bad, because, hey, it’s done…. I’ll see y’all tomorrow, if I can figure out a good reason to do so…. Ah, hell, who am I kidding? I always do….