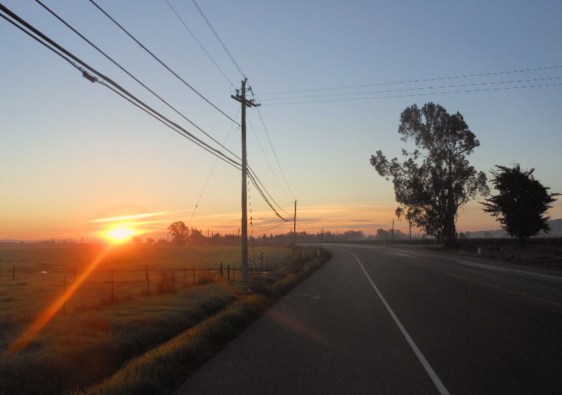 Sunrise on the Road

Warning/Disclaimer: Any mental functions attempted in this area must be re-evaluated during a subsequent period. It has been discovered that standard logic works sideways in this area, if it works at all, due to the influence of the occupant.

Today’s opening picture is one of my own, and, it’s got a cute little story to it…. If you look closely at the left side of the picture, you’ll note the ray of light that comes directly at the area where the picture was taken. In the normal way, one might guess it was a trick of refraction, due to the shape of the camera lens, and the passage of the light through the atmosphere; in the normal way, you’d be right, too. But, this was NOT a ray of light from the sun, which traveled 92 million miles through space to reach me; it was actually a laser guide sight, from a ship hiding behind the clouds on the horizon….

You might think I’ve slipped over the edge, but, if you go to that spot (I can tell you where), you’ll see the big hole in the ground where the laser hit the telephone pole, just out of sight on the left, causing it to explode, nearly sending me into orbit…. Fortunately for me, just as I took this shot, a tractor beam, from another ship out of camera to the right, grabbed me, yanked me away, & deposited me in a safe spot some ways away before I could even blink. (The aliens who saved me told me this right afterward, after they’d destroyed the evil alien ship, then covered the whole area with a field of mental energy which cleared the events from everyone’s memory…. Kind of the techno equivalent of the Memory Spell in the Harry Potter world, eh?….) Lucky, wasn’t I?….

You may ask, first, if I’m getting any treatment for this…. No, silly, why would I? Most people suffer from being insane; I revel in it.

Secondly, you’ll no doubt ask how I can expect anyone to believe it’s true; the truth is, I don’t much care, because I expect that. The aliens told me I could talk about it if I wanted; nobody would believe me…. They were right, weren’t they?

Okay, let’s get on with the REAL nonsense we have planned for today…. Who knows? Maybe some of it will be less illusory…. I wouldn’t put too much money on it, though, without some decent odds…. Who’s gonna give those around here?….

An older student came to Otis and said, “I have been to see a great number of teachers and I have given up a great number of pleasures. I have fasted, been celibate and stayed awake nights seeking enlightenment. I have given up everything I was asked to give up and I have suffered, but I have not been enlightened. What should I do?” Otis replied, “Give up suffering.” — Camden Benares, “Zen Without Zen Masters”

I’m in the mood for some mild fantasy, and a little fun…. How about an old favorite movie? This one may pull my covers a bit, threatening my status as a curmudgeon, but, what the hell…. Enjoy, ffolkes, this is a better story and movie than it seems… It also has one of the first movie attempts at combining animation and live actors in the same film sequence; the only flaw in I see is its Disney-esque blandness to the dialogue; a lot of the jokes could have used a bit of innuendo, or some spicy language…..

Once you read the pearl(s), you’ll understand the picture…. Well, I’d hope you will….

“…to emphasize the afterlife is to deny life. To concentrate on Heaven is to create hell. In their desperate longing to transcend the disorderliness, friction, and unpredictability that pesters life; in their desire for a fresh start in a tidy habitat, germ-free and secured by angels, religious multitudes are gambling the only life they may ever have on a dark horse in a race that has no finish line.” — Tom Robbins, — Skinny Legs and All, p. 305.

“In the sky, there is no distinction of east and west; people create distinctions out of their own minds and then believe them to be true.” — Buddha

“Belief gets in the way of learning.” — Lazarus Long, “Time Enough for Love” by Robert Heinlein

“If the misery of the poor be caused not by the laws of nature, but by our institutions, great is our sin.” — Charles Darwin

“History is little else than a picture of human crimes and misfortunes.” — Voltaire — L’Ingenu, Chap. x

“History does not record anywhere at any time a religion that has any rational basis. Religion is a crutch for people not strong enough to stand up to the unknown without help. But, like dandruff, most people do have a religion and spend time and money on it and seem to derive considerable pleasure from fiddling with it.” — Lazarus Long, Time Enough for Love (1972) by Robert Heinlein

I was going to leave it at that, figuring it would do the trick…. But, I see it needs to move further along the train of thought, so, we’ll keep at it, until we find the right pearls to complete the necklace, er, composite of ideas as metaphor….

“If we let people see that kind of thing, there would never again be any war.” — Pentagon official, on why US military censored graphic footage from the Gulf War

“A “peace-loving nation” is one which bans fireworks and manufactures hydrogen bombs.” — Smart Bee

“Some writers have so confounded society with government, as to leave little or no distinction between them; whereas they are not only different, but have different origins. Society is produced by our wants, and government by our wickedness; the former promotes our happiness “positively”, by uniting our affections, the latter “negatively”, by restraining our vices. The one encourages intercourse, the other creates distinctions. The first is a patron, the last is a punisher. Society in every state is a blessing, but government even in its best state is but a necessary evil; in its worst state an intolerable one…. — Thomas Paine, opening lines of “Common Sense” — 1776

That lies within their hands, till they have lost it.

Well, there you go…. It’s a bit murky, but, hey, it’s better than a rant, and, you still get to see who is responsible, and how it happened…. It’s a start….

Here’s another one from the archives, since the one percolating seems to have filed itself in an unknown folder…. SIGH…. If only it was a conscious process for me….

Crass and cold, the beggar finds me swollen, so frail and fat
with painful stepping motions, running, like a Republicrat.
Building with straw and spittle, should artists come aground,
we all pay heavily, a billion for a bloody pound.

Too desperate, too ashamed to play such a part
We ask for belief, and sweet liberty, dressing up so smart.
It falls between the simple cracks, always in a hurry
To find a shrunken ego, ashen, swift, and full of worry.

Never there was a more penitent group, such a sterling way
To fast in luxury, making sure the guilty enter, but do not stay.
Forgotten gods can find their diffident suitors tonight
With dream-fitted convention, and a natural sense of delight.

For all the silken babies cried, to see the broken dreams of power
forgiven moments of certitude serve, filling up the maiden’s bower.
All the patient, loving veterans of ancient foreign time,
give up their first impressions, dying, dying for a rhyme.

Today’s final old-school pearl will finish off our discussion of the power of dubiousity…. Enjoy, ffolkes; you may not realize it, but, this is a fairly good look into my soul….

“I love to doubt as well as know.”

“The fundamental cause of trouble in the world today is that the stupid are cocksure while the intelligent are full of doubt.” — Bertrand Russell

“The majority of mankind is lazy-minded, incurious, absorbed in vanities and tepid in emotion, and is therefore incapable of either much doubt or much
faith.” — TS Eliot

“If a person offend you and you are in doubt as to whether it was intentional or not, do not resort to extreme measures. Simply watch your chance and hit him with a brick.” — Mark Twain, Advice to Youth Speech, 1882

“Faith which does not doubt is dead faith.” — Miguel de Unamuno

“Human beings are perhaps never more frightening than when they are convinced beyond doubt that they are right.” — Laurens Van der Post, The Lost World of the Kalahari (1958)

Believe me, than in half the creeds.”

Most of today’s effort was done ahead of time, so, I’m not sure how seamless it may all be; as is our habit, we can only say, “Oh, well!”. We’ll have to work on that. But, that’s a task for another day; this one is already shot to hell…. See y’all tomorrow, ffolkes, provided Reality cooperates…..

9 thoughts on “Astrogation isn’t for amateurs….”