"If a man take no thought about what is distant, he will find sorrow near at hand."

Good morning.... We are not happy. In fact, we are not we, but, nonetheless, we aren't happy. Nor would you be, if your plans to garner a bit of sleep fell through as thoroughly as have mine. It is now 0129, according to the microwave clock. That's too frigging early, even for me. I had hoped to make it all the way to 0400, but, it seems my body prefers for me to experience TD q4h, whether I am ready for it or not. (TD = tardive dyskinesia, the bane of all opiate junkies and victims of medical abuse, to wit: me....) I don't know about y'all, but I just LOVE being up all fucking night, shaking and pacing! Can you think of a better way to lose weight?.... Well, actually, I can....

Ah, well, not long to go now.... My stay in Hell should only last another eight or nine days. Piece o'cake, ya think? And, hey, I've gone this long without ripping anyones tongue out with my bare hands, so, it's looking good for making it through this without any jail time. Bonus! Mom would have been proud....

Now, of course, I am in even deeper doo-doo.... How can I save this, without resorting to outright cheating, or perverse manipulation of the sort we all must endure from the BRC and those of their ilk? (I sure am glad I'm in a different ilk....) (Exactly what IS an ilk, anyway?.... Never mind....) I suppose I could write a quick fictional opening, but, the reality based crap at the top kind of aced that idea. How about some.... no, better not. That didn't work out well the last time we tried it. Maybe we could.... nope. Forgot; we lost our license for that. Hmm.... this is getting sticky, isn't it?

Ah, I know. I'll break out an old #4. It works every time. It's also our cheapest method for getting us out of here, as it's simply too fast and effective to be illegal, thus saving us a small fortune in legal fees. As those of y'all who have been here before know, y'all should hang on to something solid, and, for heaven's sake, put down your drinks.... Luigi, it's a # 4; hold on!....

"Grief can take care of itself, but to get the full value of joy you must have somebody to divide it with." -- Mark Twain

White Rabbit mode kicked in, for some reason; hence, the default musical selection for today reverts to our standard.... Enjoy!....

Those among you who have read the book "Zen and the Art of Motorcycle Maintenance" by Robert Pirsig will know what I mean when I say I've been on a personal chautauqua, seeking the path to my own center of being. It's been a long journey, as I had apparently wandered much further than I had imagined, which, when one stops to think, is only natural, given the whole concept of losing one's way.... Any who, I'm getting closer, and can feel both poetry and prose percolating, with the promise of copious floods of nonsense, verbal trickery, and a bit of philosophy yet to come. For now, in place of the rant which would usually grace this section (a bit o ego there, yes?...), here is a nine-star pearl, with some thoughts on how it all got to be the way it is today, in this crazy old mode of existence we call Reality.... Enjoy, ffolkes....

"And it came to pass that in the hands of the ignorant, the words of the bible were used to beat plowshares into swords..." -- Alan Watts

"Prejudice is the child of ignorance." -- William Hazlitt

"The fact that an opinion has been widely held is no evidence whatever that it is not utterly absurd; indeed in view of the silliness of the majority of mankind, a widespread belief is more likely to be foolish than sensible." -- Bertrand Russell, Marriage and Morals

"The entire world is being driven insane by this single phrase: 'My religion alone is true.'" -- Ramakrishna, Hindu saint & reformer

"Most of the dogmatic religions have exhibited a perverse talent for taking the wrong side on the most important concepts in the material universe, from  the structure of the solar system to the origin of man." -- George Gaylord Simpson

"Before you have sex you have to be elected to a high government position." -- Zippy

"Grown men, he told himself, in flat contradiction of centuries of accumulated  evidence about the way grown men behave, do not behave like this." -- Douglas Adams 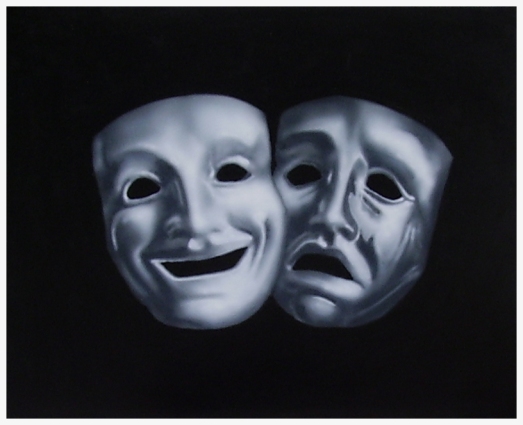 Memories are all we have sometimes
to keep our sanity intact,
with learned phrases and subtle rhymes
lessening life's vicious, vibrant impact.

Such vigorous and elevated temper
brings us rare moments to ponder,
filled with lessons all need to remember
lest base perception lose valued wonder.

Laugh loud when entropy sticks fast
leaving shameless anger in its wake.
Let bygones pass quietly into the past
reaping only what is left to take.

Today's final old-school pearl speaks to our humanity, and, how to go about being the best human one can be.... Pay attention, ffolkes; this one is bound to be on the Quiz....

He not busy being born
Is busy dying.

"Anyone who has had a bull by the tail knows five or six more things than someone who hasn't." -- Mark Twain

"No one can see their reflection in running water. It is only in still water that we can see." -- Taoist Proverb

"Down in their hearts, wise men know this truth: the only way to help yourself is to help others." -- Elbert Hubbard

"In theory there is nothing to hinder our following what we are taught; but in life there are many things to draw us aside." -- Epictetus -- Discourses, Book i, Chap. xxvi

"No amount of ability is of the slightest avail without honor." -- Andrew Carnegie

"I am enough of an artist to draw freely upon my imagination. Imagination is more important than knowledge. Knowledge is limited. Imagination encircles the world." -- Albert Einstein

"It's like brother Nietzsche said--being human is a complicated gig, so give that dark night of the soul a hug and howl the eternal yes." -- Chris, the Philosophical DJ on the TV show, Northern Exposure

Since it's taken nearly three days to get this done, I'd best take it the way it now, before I decide to start over (no worries, not gonna happen....). In point of fact, I must go out today, into the BBR, to take LeeLoo to her first visit to the vet.... No telling when, but, I will be back.... Meanwhile, stay alert, keep your powder dry, and question authority; you know, the basics.... See ya....

Y'all take care out there,
and May the Metaphorse be with you;
Blessed Be, dearest Carole, Mark,Theresa, & Richy
and everyone else, too...

6 thoughts on “Unwilling to swim, it sank….”