“A chief event of life is the day
in which we have encountered a mind that startles us.” 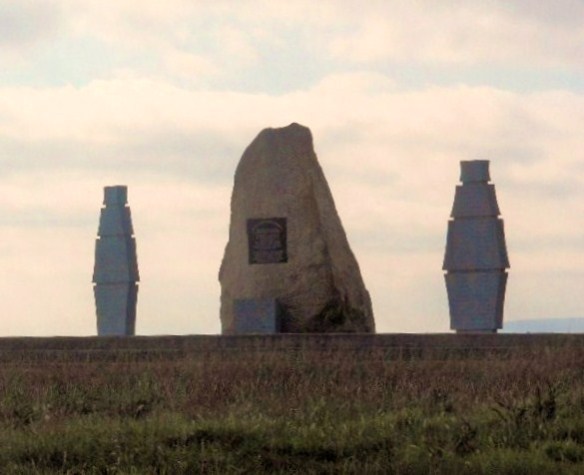 Monument for the Exodus, Galway, Ireland

Hajime…. The simple truth is, I’m becoming a reclusive hermit. From all I can determine, the world at large, in this country especially, has gone stark, raving mad, & I find the most satisfying way to deal with it to be to ignore it, and most of the people in it, as far as possible. I stopped watching TV several years ago; the only time I see what’s on is during my occasional trips to a lounge, on those relatively rare occasions I want to sip a nightcap & socialize to some degree with those others who retreat from the madness. Other than that, my socialization is limited to interacting with my familiar, who remains an enigma, like any Siamese cat, and to conversations with a few people over the internet, via email or comments on a blog. The only ranting I do these days is confined to those comment sections, which seems to be enough to assuage the urge to do so at all….

Perhaps the failure to connect is with me; I can’t seem to bring myself to care much. The more I ignore the world, the more satisfying Life seems; whenever I try to deal with some part of it, I am presented with ample evidence of the depths of insanity to which human culture has plumbed. In my defense, I’ll note I keep trying, interacting with all I meet, and, to be honest, I meet a lot of fine people, who, if they were not so deeply buried in odd misconceptions, which they possess due to the sheer weight of misinformation they’ve been taught all their lives, would otherwise be interesting. As it is, simply dealing with most of them becomes problematic, as their ignorance adds to the overall insanity so prevalent in every aspect of society, making it hard to elicit any sort of rational response from any of them.

You might think this makes me judgmental, but, I would say, no more so than anyone else human; we all judge, according to our own set of likes & dislikes. I like to think the standards by which I judge are loose, in terms of compassion & understanding compared to the average. I try to give people a lot of leeway, to be fair, and so I can honestly expect the same in return. Unfortunately, this is, apparently, too rational for most folks to deal with, making it even more problematic for me to connect with most humans on more than a surface level; when I get to know them more intimately, they too often turn to their ignorance, rather than their rationality, & I am, again, disappointed to find them unreachable by any rational means. SIGH…. silly humans.

I guess that all sounds like a complaint; it really isn’t. I guess I’m just saying I can only wish that I could find a small group of humans living in my vicinity who spent more time ‘thinking’, & less time ‘reacting’ to what goes on in the world. But, I’m old enough to realize I can’t make any changes in anyone else; I’m the only one I have any power to change. Since I’m already in the ongoing process of doing just that, I suppose I’ll have to be satisfied with that, & forget about making a lot of ‘acquaintances’. I’ll hold out for those with whom I can call ‘friends’. I have several of those, and family, and that will have to be sufficient….

For now, I suppose I should cease the meandering ramblings, & get this posted. The poem I was working on disappeared; I think I accidentally deleted it during a cut & pasting session, & can’t seem to find it in my head. So, I’ve used an older poem; the rest is fresh, & relevant as I can make it, given my less than compelling urge to get anything at all written for this blog. The good news, for me, is I am now up to more than two miles a day walking; I’ll be doing three to four in no time at all, at this rate. My increased stamina is matched by other positive signs of physical healing of some of the problems brought by aging; I’m fully regular, and my sleep habits are approaching normality, as I’m averaging 7-8 restful hours each night, with no problems in falling into sleep…. That, by the way, is a BIG improvement over the past five to ten years….

Hmm… I see I’ve rambled rather extensively, & it’s getting late; I suppose I should get this posted before I decide to blow it off for another day. I also suppose I’ve rambled so much, I should do so without any further delay. Here’s how that one works….

“Even while a thing is in the act of coming into existence,
some part of it has already ceased to be.”

Image from YouTube.com via Google Images

A bit over three years ago, this young singer, then age 7, won the “Norway’s Got Talent” competition, singing a series of jazz/r&b/ballads of vintage distinction, covering artists such as Billie Holiday, Nina Simone, Etta James, and others. She is now age 10, an internationally known artist; her YouTube page has received over 100 million views of her performance videos alone. She has appeared all over the world, on TV, in festivals, & can be considered, in my mind, one of the finest young talents to ever shine.

Her voice is incredibly rich, & not merely because of her tender age… She has a massive range, and her ‘feeling’ for the songs she chooses to sing is, simply, astounding; she is the living embodiment of an “old soul”.  The link under her name is for her You Tube channel; the embedded video is of her singing a version of “Feeling Good” in the style of Nina Simone… You’ll see why people all over the world listen to her sing, myself among them…. If you don’t like this, well, you really should think about widening your scope of interests…. (*smile*), because she is amazingly good; I think she is a living example of what makes us human….

In the semblance of Time described below,
Circumstance plays its part.
Though Fate has its say,
only the most elemental of emotional responses
could conceivably hold sway before the throne of Reason.

As the light of Illumination grows stronger,
Fear retreats, hidden in shadowed halls behind the stairs,
while Serenity fills hearts and minds.
Gladly, the people sleep, unwary, unaware,
t’will be long before they woke….

Twice now, Forever has come, gone; ah, look!
It came back, a bit bedraggled, to be sure.
(A little whiny, too…)
Perhaps, shifting reality into dreams is not such
a bad idea, after all.

If Time stops, how will you know?

“I have an existential map.
It has ‘You are here’ written all over it.”

“If you want to know all about the sea,
you go and ask a sailor, or a marine biologist, or an oceanographer,
and they can tell you a lot about the sea.
But if you go and ask the sea itself, what does it say?
Grumble, grumble, swish swish.
It is too busy being itself
to know anything about itself.”

“The time you enjoy wasting is not wasted time.”

“If there is a sin against life,
it consists perhaps not so much in despairing of life as
in hoping for another life and
in eluding the implacable grandeur of this life.”

Narim: What your mind doesn’t know, your heart fills in.
Carter: I don’t know what that means, exactly, but it’s beautiful.
Narim: Which is exactly what it means.

“For him who has conquered the mind,
the mind is the best of friends;
but for one who has failed to do so,
his mind will be the greatest enemy.”

It costs so much to be a full human being
that there are very few who have
the enlightenment or the courage to pay the price…
One must abandon altogether the search for security
and reach out to the risk of living with both arms…
One has to embrace the world like a lover…
One has to accept pain as a condition of existence…
One has to court doubt and darkness as the cost of knowing.
One needs a will stubborn in conflict,
but apt always to total acceptance
of every consequence of living and dying.”

I should think the five-plus paragraphs of blather found in the intro section would be enough for anyone’s taste, so, I’ll skip any more here at the end, in favor of getting posted before I lose the focus to do so. I hope you enjoyed today’s outburst, & that you’ll continue to drop in now & again to see what’s come up. I intend to continue my relative hiatus, but, can feel some stuff building up that will have to come out somewhere; it may as well be here. Until then, be well, be as happy as you may, and stay strange…. Trust me, life’s tastier that way…. See ya, ffolkes….